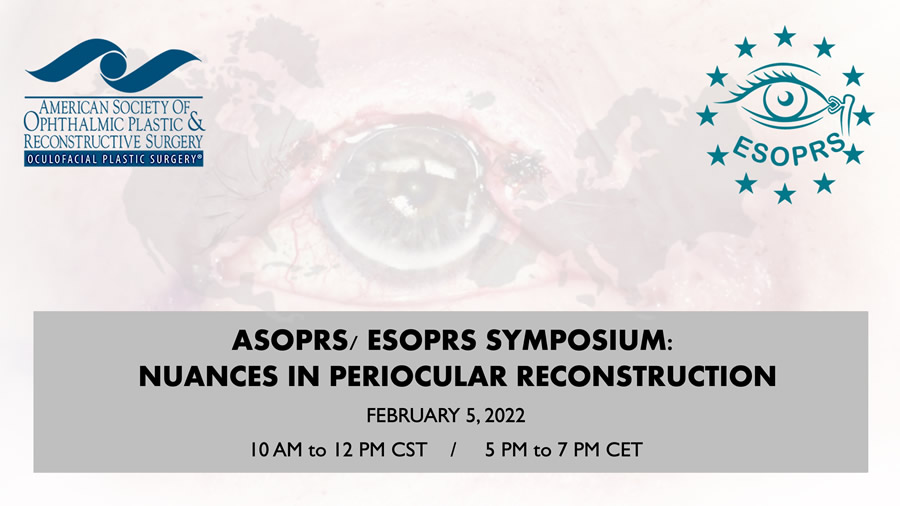 A joint ESOPRS/ASOPRS symposium about reconstructions of lid defects with cases and panellist discussions.

Please join us for a joint virtual symposium between ASOPRS and ESOPRS on eyelid reconstruction on February 5, 2022.

The symposium will consist of case presentations with discussions by ASOPRS and ESOPRS members. Registration is free. Please see below for more information.

We look forward to seeing you in February!

Members of ASOPRS and ESOPRS, and residents and fellows are invited to attend.

This symposium is at no cost to all attendees, but space is limited.

A link to join the webinar will be sent out before the meeting.

We are pleased to announce that the Oculoplastic Today 2022 Conference website is live – www.oculoplastictoday2022.com

Deadline for submitting abstracts is 28 February 2022.

The conference will host more than 20 world-leading speakers who will present cutting edge topics in Oculoplastics, we look forward to sharing with you our enriching scientific program in the exciting non-stop city of Tel Aviv.

The conference is intended for all specialized ophthalmologists and specialists, from all disciplines, and provides a rare opportunity to hear state of the art sessions and learn about the latest developments in this fascinating field.