The Committee of ESOPRS strongly supports the initiative of Dan Georgescu who invites all young ESOPRS (candidate) members to join the YESOPRS group in Athens 2016. 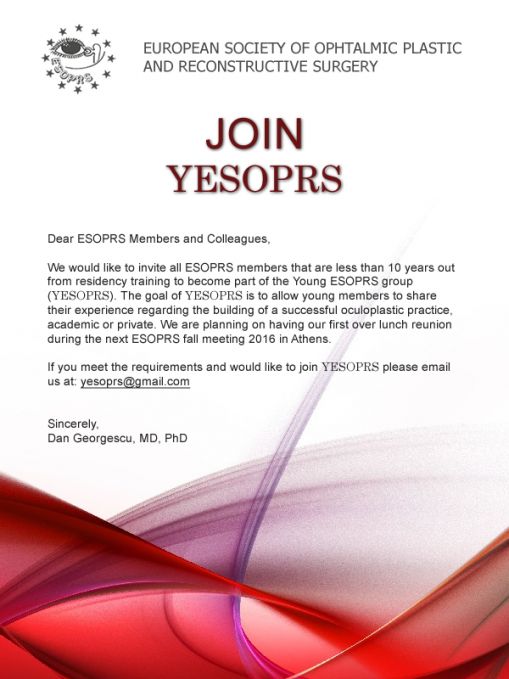 Reflections on the 38th Annual Meeting

ESOPRS is proud to provide partnership support to the first on-line International Symposium on Wartime Ophthalmic Trauma, organised by ASOPRS. The meeting is on May 7, 2022, with costs generously covered by ASOPRS. It will be a 2-hour session starting at 5pm CEST (8am PST / 4pm BST / 5pm CEST / IST 2030). More info here read more

The PAAO will dedicate special attention to Oculoplastic and Orbital Surgery this May. Over three webinars, international specialists will convene to provide the latest information on Eyelid, Orbital and Lacrimal Surgery. We hope you can take advantage of these interactive educational sessions with world-renowned surgeons.

It is our pleasure to invite you to submit an abstract to the conference of the International Society of Ocular Oncology, which will be held in Leiden, The Netherlands, from June 17 till June 21, 2022.

Traditionally, this conference is spread out over five days, with one day for each of five subjects: collaborations and basic science, retinoblastoma, uveal melanoma, “other” intraocular tumors, and conjunctival/eyelid/orbital tumors. People have specifically asked for more presentations of the last category.
Lymphoma fits in “”other intraocular tumors” and the conjunctival/orbital category.

As this may be one of the first conferences where people can meet in person, we have created a lot of outside social events, including a boat tour in open boats, a dinner outside and a garden party. The conference can also be attended on line, while the presentations will hopefully be presented live.
We very much look forward to receiving your abstract, which can be submitted till January 7, 2022.

Save the date, Cases and discussions of challenging pediatric oculoplastic cases by world leaders. More info later on…