The hotel is perfectly situated near the Romanian Athenaeum Concert Hall and 3 kilometers from the country’s iconic landmark, the Palace of Parliament. Within walking distance of the Radisson Blu you’ll find the National Museum of Art and the Memorial of Rebirth, which stands 25 meters high in Revolution Square. 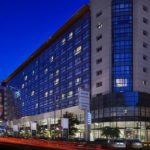 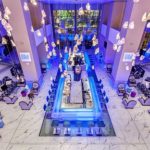 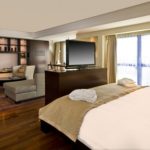 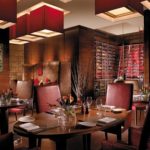 Taxis are the preferred means of transportation in Bucharest. They are relatively inexpensive (1.39 RON or 33 Euro cents / Km), readily available in both the airport and the city and a normal fare from the airport to the hotel costs around 30 RON or 6 €.
A trip from the Henri Coandă International Airport to the venue will take about 25 to 40 minutes, depending on traffic, and it will cost approximately 40 RON (~10 EUR).

Travel by bus from the airport

Travel by train from the airport

These trains connect Bucharest Henri Coandă International Airport and Bucharest North Railway Station. The passengers can reach the CFR Airport Stop by shuttle buses departing from the Arrivals Terminal. Tickets for the train/transfer bus are available at the ticket office located in the International Arrivals public area, as well as from all the railway station ticket offices and travel agencies in the country. One ticket costs 6,8 lei.
From Gara de Nord, take the metro line 133 to Piata Romana and walk about 500 meters to arrive at the Radisson Blu Hotel, Bucharest.